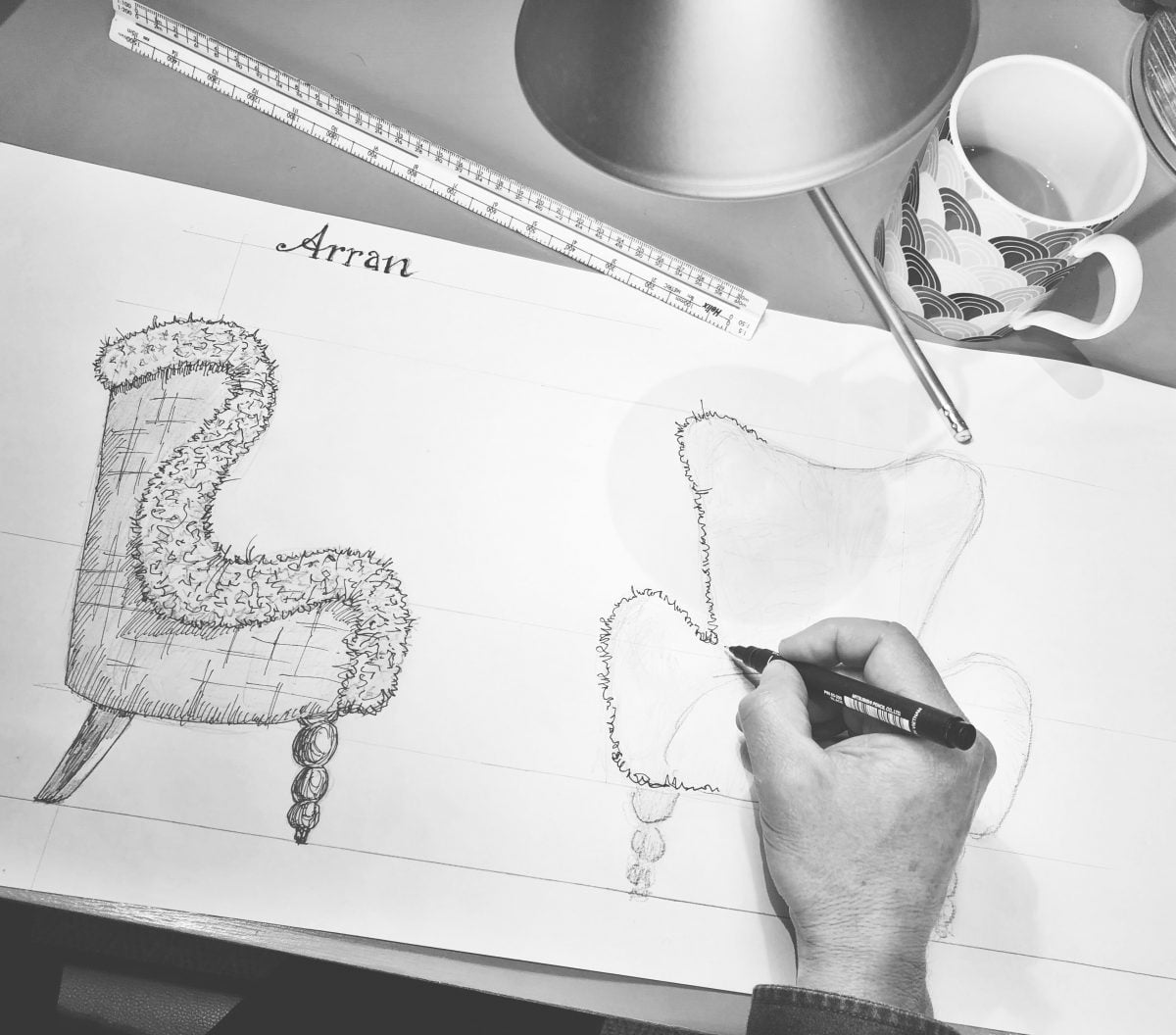 It was while we were enjoying a long weekend on the Isle of Arran that we came up with a new chair design inspired by this beautiful island.

Our friends had generously offered us the use of their lovely cottage. As usual we cut things fine and made the ferry by a matter of seconds, arriving to the smell of burnt rubber and the sound of screeching brakes…and once across the water we realised we had left the keys back on the mainland, but that’s another story! Having safely arrived Arran worked its magic and we were able to totally switch off. Positioned in the Firth of Clyde and with its very own “Highland” and “Lowland” areas along with its forests, rivers, small lochs and beaches, Arran is often described as “Scotland in miniature” and from its high point of Goat Fell to Brodick Castle there is no shortage of natural, historical and cultural stimulus. Our particular favourite was the short, steep walk to Coire-Fhionn Lochan – a magically peaceful mountain lochan where Jackie, Paddy and I had the white pebble beach and wide expanse of clear blue skies entirely to ourselves.

We had been ruminating on a slightly less wild design than our Skye chair and the gentle undulations of the glens and coastline effortlessly insinuated themselves into the early sketches of our ‘Arran’ design. With its deeply scooped wings and softly bowed top rail it has a distinctive, highly individual outline. And with the island’s most populous resident being the ubiquitous sheep we only had one upholstery in mind – this time a short haired sheepskin that adds cosiness and luxury to what is already a hugely comfortable chair. Originally finished in a palette that reflects the soft natural tones of the island this popular piece has been bespoked in various sheepskin colours and alternative contrast fabrics to the sides and rear (a version destined for American customers was in pure white sheepskin with a red plaid contrast).

If you have visited Arran we hope you’ll think our chair does the island’s beauty justice – and if you haven’t yet been perhaps you will be inspired to book a wee trip! Whether you are curled up to watch a movie, read a book or take a nap, like the island itself, this chair is one that you’ll not want to leave. 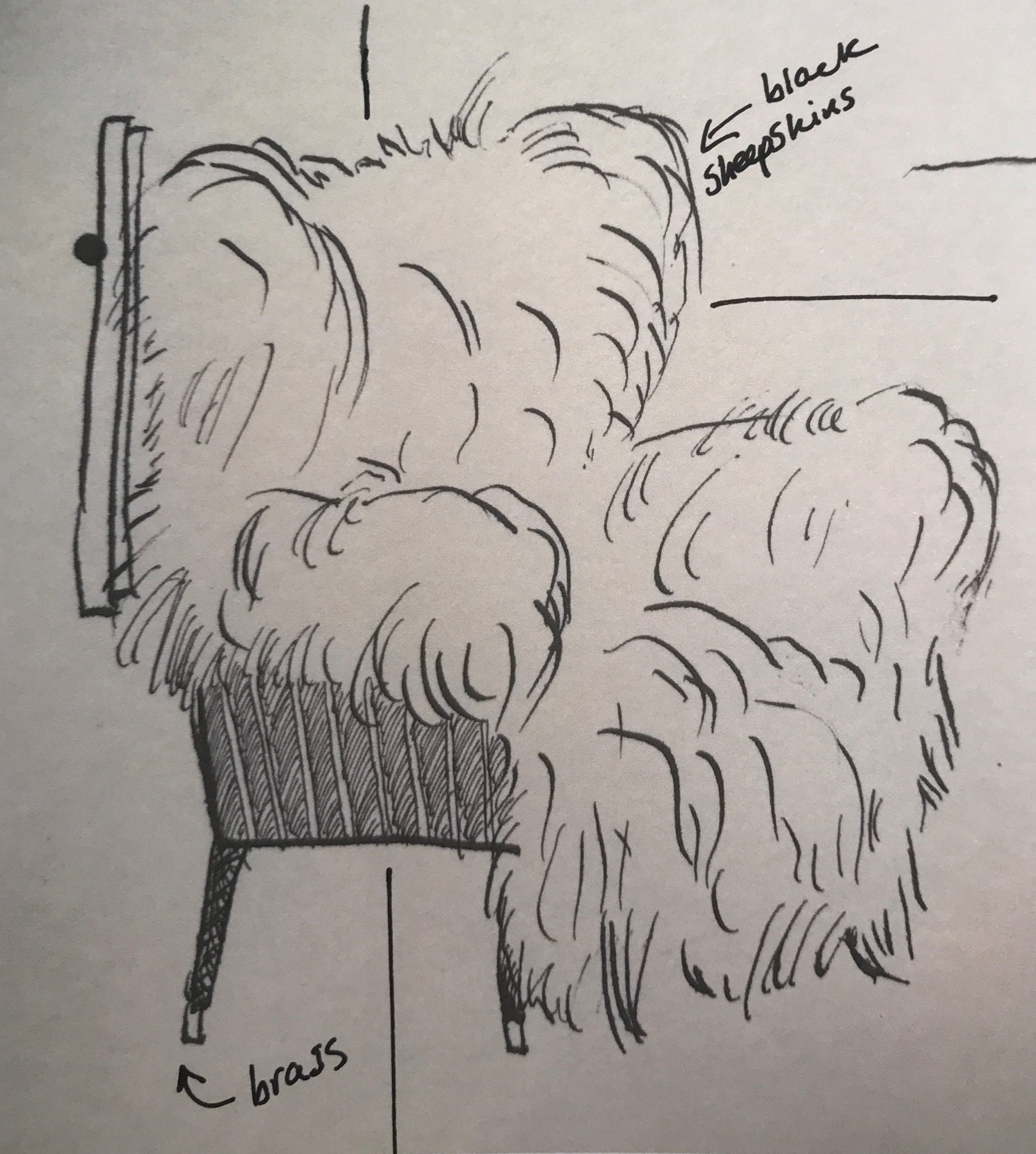 Every great chieftain needs a great family seat, and with 25th January soon upon us what better vantage point from which to enjoy the bacchanalian delights of a Burns supper than our Skye chair.

Skye epitomises so much of the romance of Scotland’s Highlands, from the majestic peaks of the Cuillins to the bonnie boat speeding across the sea to Skye. Having made many trips to this wonderful island, enjoying the hill walking and the hospitality (including Talisker, that wonderful star in the whisky firmament) Jackie and I were determined to try and capture this spirit in a Fisk furniture piece.

The initial bolt of inspiration actually struck over 700 miles away – in Copenhagen. One of my favourite cities, we loved the welcoming generosity displayed by the many pavement cafes and bars who place sheepskins on their chairs (and the fact that the Danes don’t pilfer them!) Why, I wondered, was it so rare to see a chair that is actually fully upholstered in sheepskin? And so the idea of this chair was born.

The very first priority of any chair is that it successfully serves its primary purpose – comfort. So we were very particular in our deliberations over the rake of the Skye chair’s back, the angle of the lugs – in short we wanted a chair that was as much a hug as a seat. It also had to have a presence and personality to do justice to its namesake, so we carefully selected a black long-haired sheepskin to provide the very essence of windswept and interesting. We want all of our Fisk furniture pieces to be as much a talking point in a loft or a croft and so decided on a counterpoint to the sheepskin with a 50’s-inspired cocktail chair-style base, upholstered in feature broad-chalked pinstripe. The finished piece is so striking and definitely one of my favourites.

With a tumbler of whisky lovingly poured from the Fisk Staffa drinks cabinet and rested within reach on a Howard table, you couldn’t have a better environment to contemplate the honest, sonsie face o’ the great chieftain o’ the puddin’-race.

Do make an appointment to view our full range in our showroom. 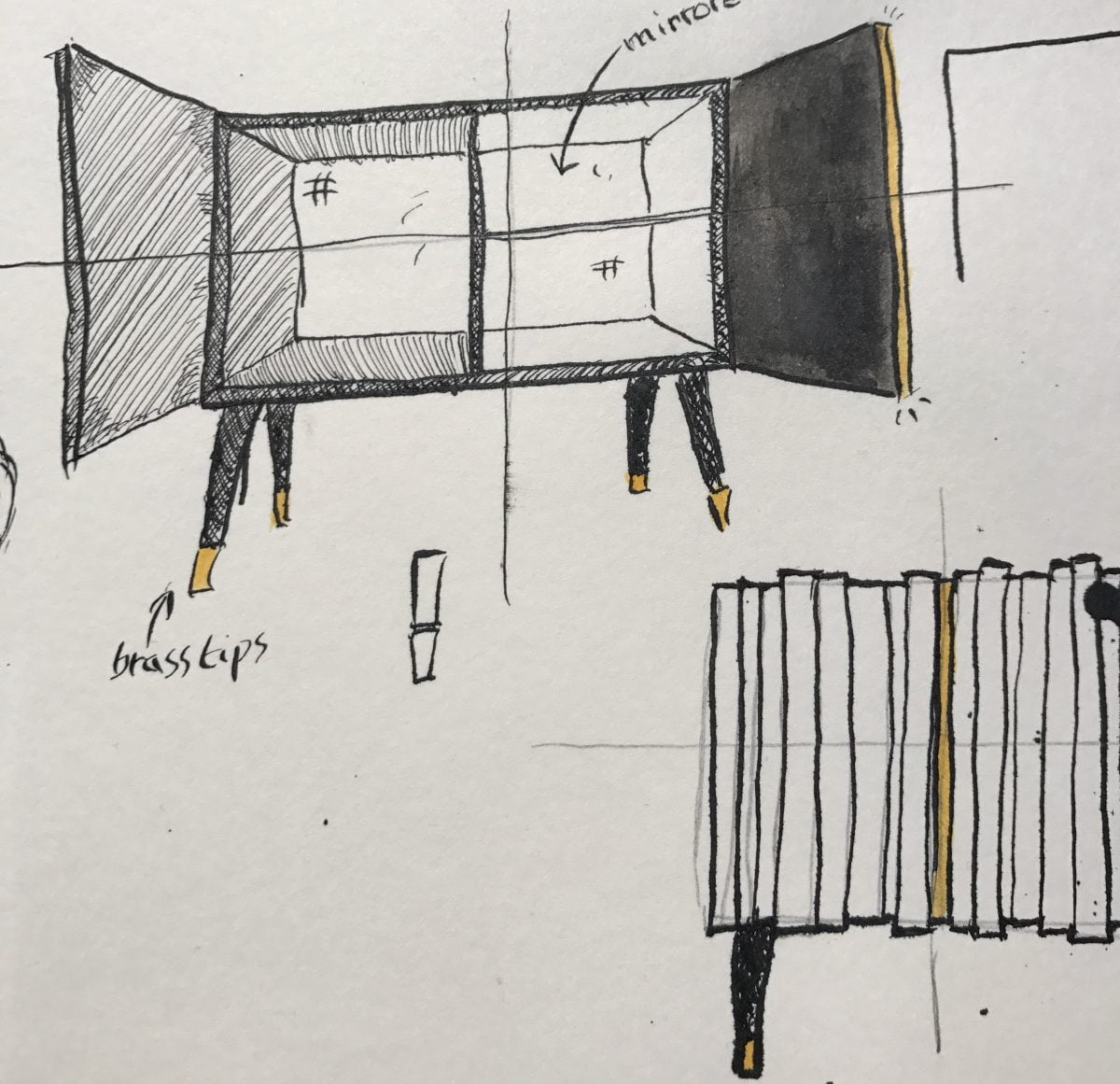 Who hasn’t been struck by the primeval geometry of Staffa’s basalt columns and the romance of Fingal’s Cave? It has inspired writers, explorers and, most famously, Mendelssohn who composed his Hebrides Overture in homage.

It was certainly an image that had lurked in the back of my mind over the years, reinforced by many a painting and engraving, before forcing its way into our thoughts as a prospective, and unusual, furniture design. I put pen to paper with many initial ideas – some attempting to also reflect the fluid outline of the island or its craggy brow, but we felt these were aping the island and that the sketches of, for example, an occasional table appeared forced.

It is often the ‘art of omission’ which enables a motif to provide substance to a design without overwhelming it – what you leave out being as important as what you include – and the elegant simplicity of Wirkkala’s glassware helped inspire the stylised, irregular columned doors of Fisk’s Staffa cabinet. The irregularity was further amplified by offsetting the doors and we drew the eye to this intriguing asymmetry with a brass finish fore-edge.

Influences come from many directions and it was actually a piece of glassware by Finnish designer Tapio Wirkkala, in an exhibition of Nordic Modernist Design at the National Museum of Scotland in January 2017, that proved vital in how Fisk would reference this pillared island in a piece of furniture.

Of course, a drinks cabinet should hint at the pleasures within and this brass detailing acts as an invitation to open and explore a glamorous glass and smoked mirror interior.

In sketching out this piece we were as conscious as ever of our desire for Fisk furniture to complement any interior. We are delighted that the Staffa can be the centrepiece to a Cosmopolitan in the country as much as a Manhattan in – well, Manhattan.

Do make an appointment to view the Staffa in our showroom by appointment.